Louisville Has the Capacity to Invest More in Itself

The Greater Louisville Project’s (GLP) 2018 report indicated that over the last 15 years, Louisville has not made the progress in our Deep Drivers that would enable us to reach our community’s goals. As a follow-on to that report, the GLP was asked to investigate the resources being invested in our community across the social, public, and private sectors.

That analysis was complex, but the results clear: Louisville is investing less than the majority of our peer cities in both the public and social sectors in terms of per capita dollars. Our private sector investment is comparable with our peers.

Diving deeper, we can see that while more than 90% of high-income households (those who make more than $200,000/year) give to nonprofits, they give about 3.5% of their total income, compared to a peer city average of 4.5%. If we gave at our peer city mean, this would generate more than $80M for nonprofits and religious entities each year. This is compounded by the relative lack of endowed foundation assets, which means that Louisville’s nonprofit donations are in the bottom tier of our peer cities.

In the public sector, while the actual ranking varies somewhat depending on the methodology used, Louisville’s government spending per capita is in the bottom tier of our peer cities.

Private sector investing has fewer reporting requirements, but across some important metrics (small business loans, home loans, and venture capital investment), Louisville is in the middle tier of our peer cities. However, we are not taking full advantage of federal or CDFI resources.

The conclusion is clear, Louisville has the capacity to invest more in itself to advance a more competitive city.

A Note on Data and Equity

The GLP’s definition of community success includes the success of all community members. It is vital that our city’s progress as a whole does not mask important disparities. Whenever possible, the GLP analyzes and highlights trends along racial, geographic, and gender lines in addition to measures of overall community progress. For more data in each of these areas, as well as original and cleaned data sets, please see our website: www.greaterlouisvilleproject.org.

As this report was going to print in early 2020, COVID-19 was declared a pandemic. The GLP held the release to better understand how that would impact our community and how this data could best be used to spur community engagement in our recovery. As the community copes with both the short-term and long-term implications of the virus and the disproportionate impact on some parts of the community, it is clear that 2020 will be a turning point and this report highlights the opportunity. How we respond will define what kind of city Louisville becomes after the crisis.

The Greater Louisville Project defines Deep Drivers of Change as the forces that are critical for the long-term success of our community.

The Greater Louisville Project’s four Deep Drivers – Education, 21st-Century Jobs, Health, and Quality of Place – inform our civic agenda and provide a common language and set of metrics to define progress. The original metrics were identified by the Brookings Institution in its 2003 report “Beyond Merger” and have evolved through ongoing engagement with stakeholders from across our community. 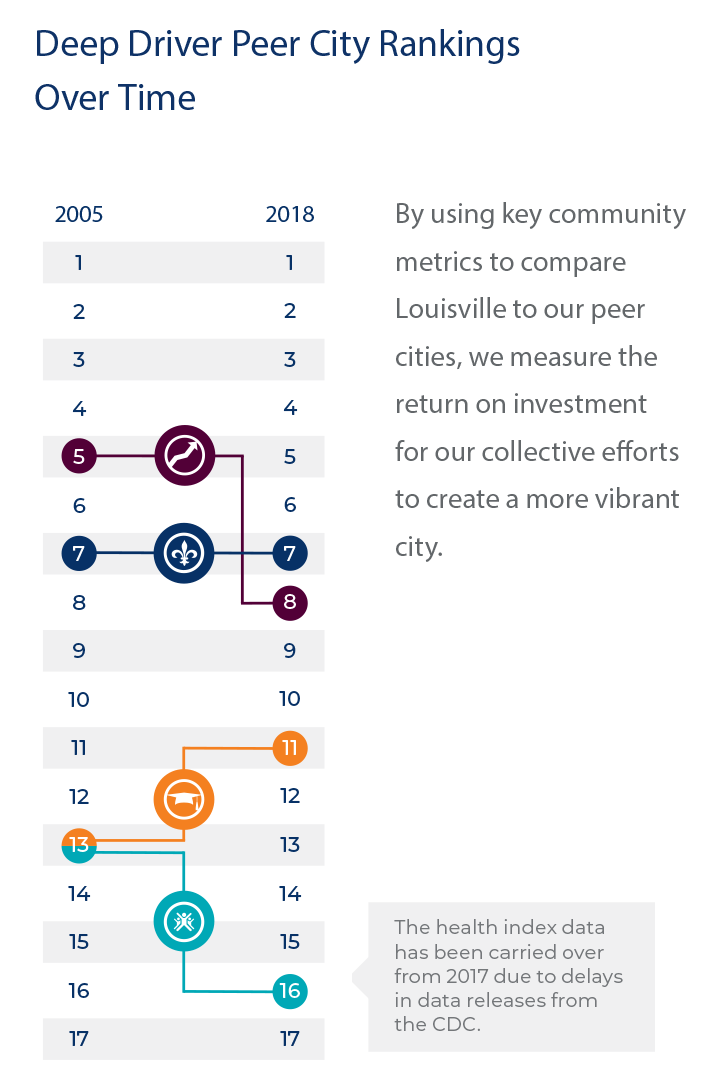 The Flow of Community Investment

Louisville has the opportunity to build on its success by investing more in both the public and nonprofit sectors. The impact of underinvestment falls disproportionately on vulnerable communities. While community-level metrics are important, greaterlouisvilleproject.org details how investment flows to different geographies and races.

Households in Louisville earning more than $200,000 per year give an average of 1% less of their income to charity than our peer city mean. This difference translates into more than $80M per year, making it more difficult for local nonprofits to meet the needs of Louisville residents.

Louisville ranks last among our peer cities in terms of Community Development Financial Institution funding, with less than $1 per capita compared to a peer city mean of $25. This makes it more difficult for Louisville residents to access nontraditional capital. If Louisville had the same volume of CDFI lending as our peers, that would mean an additional $19.1M in funding. 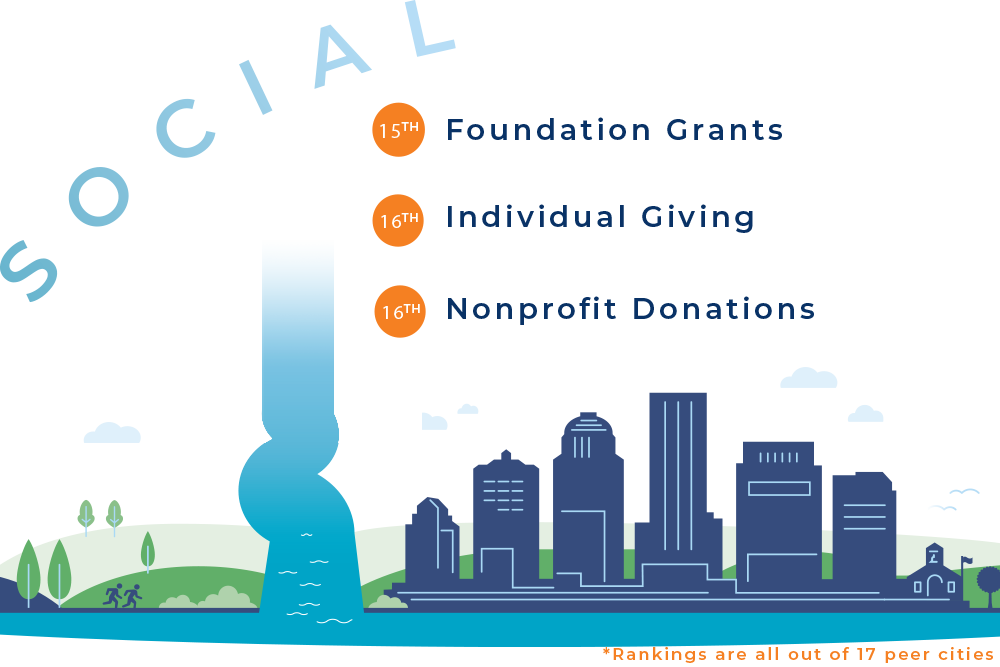 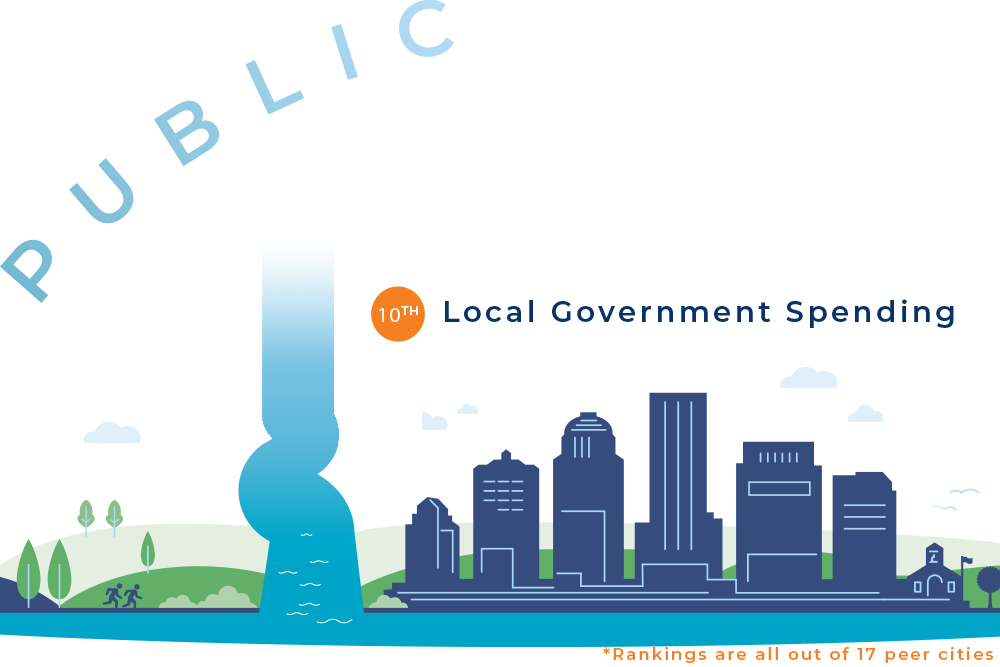 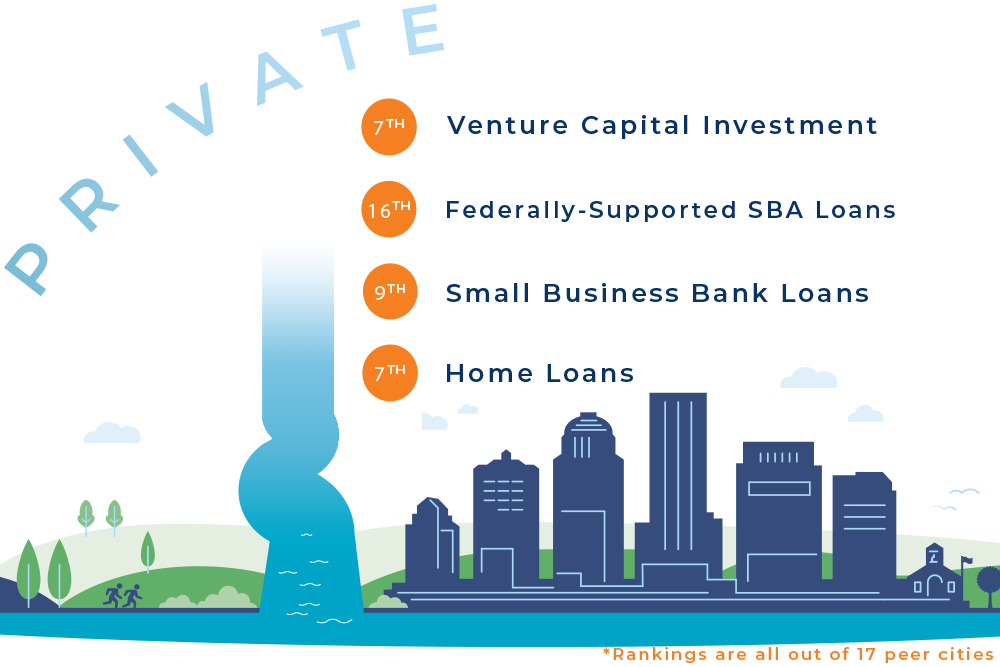 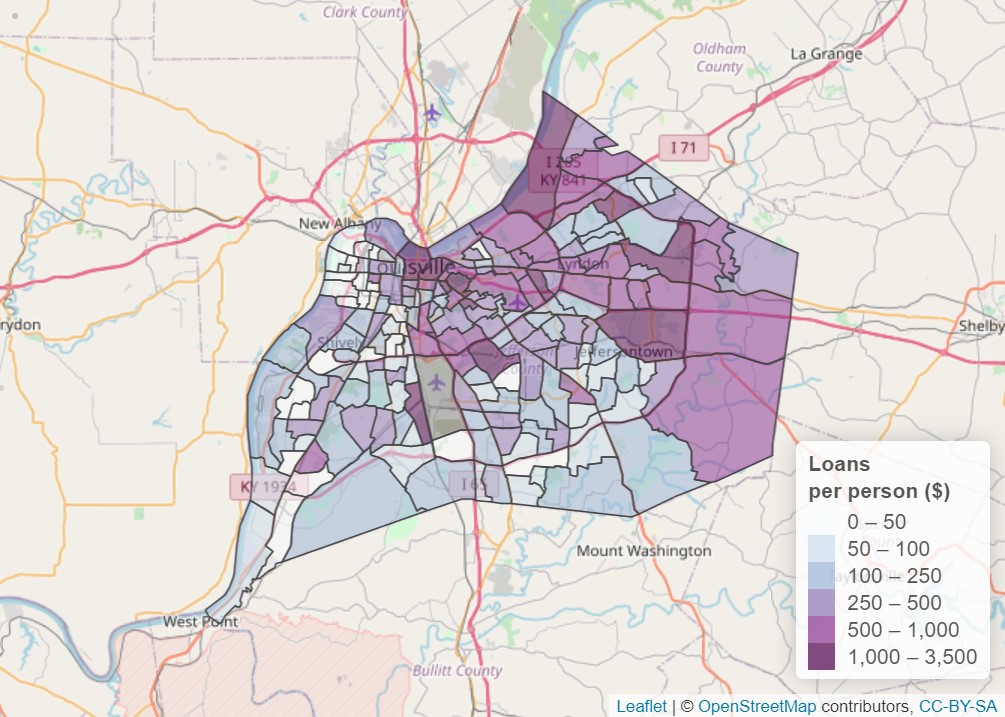 As a companion to our published report, this site provides more data, specific dollar amounts, and information about our methodology. The data and analysis included in this year’s report is complex, and many steps along the way involve human judgement. We have engaged outside experts, run multiple analyses, and consulted community partners to help us verify our conclusions. Click on one of the buttons below to dive in.

To request copies of the report, email [email protected].