A Focus on Poverty

Measuring the Impact of Multidimensional Poverty on Louisville’s Competitiveness

The Greater Louisville Project’s 2015 Competitive City Update, “Louisville: A Focus on Poverty,” examines poverty beyond income both within Louisville and in comparison to its peer cities. The report also explores the connections between poverty and Louisville’s Deep Drivers of Change: Education, 21st Century Jobs, Quality of Place, and Health. The report draws a clear connection between levels of concentrated poverty and the city’s overall competitiveness.

Louisville ranks 15th out of its 17 peer cities in concentrated poverty, with 1 in 7 Louisvillians living in a multidimensionally poor area. In comparison to peer cities such as Nashville, St. Louis, and Cincinnati Louisville is lagging behind, making it harder for individuals and the city itself to succeed.

The effects of multidimensional poverty on a resident do not just add up – they compound the barriers to each citizen’s success and wellbeing. Louisville ranks 15th out of 17 among our peer cities, with 1 in 7 Louisvillians living in concentrated poverty.

Concentrated poverty is defined as a census tract that is far below the citywide average across income, jobs, education, and health. A census tract in concentrated poverty is one that is in aggregate at least 1 standard deviation worse off than the citywide average in terms of all four MPI indicators highlighted in this report. 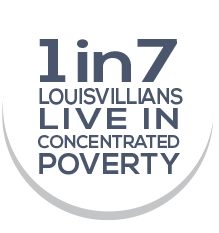 What if Louisville’s four poorest neighborhood areas were brought up to the current citywide average? Click to enlarge the image at left to see what those neighborhoods as a whole would experience.

You can view the report appendix here.

To request copies of the report email [email protected].

2019: The Flow of Community Investment