Universal Woods President & CEO Paul Neumann was a little dubious when he saw data showing the portion of Louisville’s working population that had earned some college credits but never finished.

“It said something like 25 percent of adults over 25 had some college education but had not completed a degree. I read that and said, ‘well I don’t think so but…maybe?’” Neumann recalled recently in an interview with the 55K team. “Then we surveyed our own employees and it was within 1 to 2 percent of 55K’s data. That was eye-opening for me.”

That led to a culture change within Universal Woods, a manufacturing company with about 200 employees. With a revamped education program that included paying tuition up front instead of reimbursing, about 22 percent of Universal Woods’ team have now either earned a degree or are currently enrolled in school. It has taken work and financial investment, but Neumann would tell any other CEO that it’s worth it.

“The return comes through better knowledge in your business, through retention and through other factors that can’t be measured,” Neumann said. “It’s transformational over time. You get smarter people in your building, and that matters.”

We talked with Neumann about the impact of the 55K initiative, how Universal Woods has sustained its successful employee education program, how that’s impacted his company, and what advice he would give to other companies. 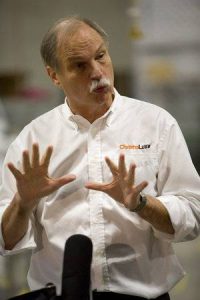 55K: How did the community goal to increase post-secondary attainment give structure to, or catalyze Universal Woods’ education programs?

PN: From the perspective of someone who lives in Louisville and cares about it, I continue to believe that 55K was, and is, one of the single most compelling social change ideas that I’ve seen and been aware of. I think that Louisville did a reasonable job of embracing it and moving forward with it. From my perspective, one of the places where we probably didn’t do as much as I wish we had was in businesses understanding their workforces and the opportunities with that, and thereby propelling the adult education portion of (the attainment initiative) at a faster rate.

I think 55K made a difference (in adult education), but the single biggest opportunity group – which I never understood until 55K arrived and started publishing statistics around it – was for people who went to college, started, didn’t finish for whatever reason and then migrated into the workforce. That continues to be an under-tapped resource within our community. 55,000 Degrees helped some people to tap into that, but it still didn’t get to the point where I think many of us wished it would be.

55K: You said seeing 55K’s data and then comparing it against your own company’s data was an “aha” moment. What changes did you make at Universal Woods?

PN: We had an education program and were encouraging people to go, but I didn’t understand at all how big the pool (of employees with some college) was already and that people weren’t starting from zero. If you aren’t starting from zero and you’re finishing something, then the probability of success gets a whole lot higher.

Our human resources group did a great job of encouraging people in terms of getting on board and thinking about getting an education. We took away some of the perceived risk by paying tuition upfront instead of reimbursing, and we did a variety of things to make it easier for people to go to school. The results then followed. Of our 200 employees, we’ve helped about 10 percent earn a two-year, four-year or graduate degree. Another 12 percent of our team is currently enrolled in college classes.

55K: How has it impacted the way those employees now perform their jobs?

PN: It has been hugely beneficial for us and helpful in terms of the education of our workforce, retention of our workforce, and how people feel about themselves. We’re absolutely seeing an increase in ability, because that’s what education does. But beyond that, they’re also seeing an increase in opportunity. We have engineers, IT people, accounting, quality assurance, maintenance workers. We had a maintenance employee who started in the factory, then went to an apprentice program, then earned a two-year degree.

55K: What changes have made the biggest difference in your workforce?

PN: Our HR department has developed relationships with different education institutions, we’ve had more counseling around education. (Read more about Universal Woods partnership with Degrees Work). We had lots of conversations around what was preventing people from starting or being successful and systematically doing away with those hurdles. You can’t do away with them all but we’ve done away with enough of them that we’ve gotten a lot more people (to enroll in school) than we expected.

55K: What are the hurdles your employees identified?

PN: Part of it is mitigating the risk. That’s why upfront tuition payment is so important instead of reimbursement. That’s one of the biggest hurdles for people. For someone making $600 or 700 a week, putting up $500 for a college class is a big deal. And when they think about losing that, it’s a really big deal. So just getting through that hurdle was the single biggest change for us.

And then we had people to celebrate. We could say “they’ve done this!” And the more people that did it, the more other people were willing to try. Celebrating graduates has become part of the culture. We have an honor roll wall in the learning center at Universal Woods. We talk about it as people graduate. We talk about it at our Christmas party every year. We just find chances to work it in. 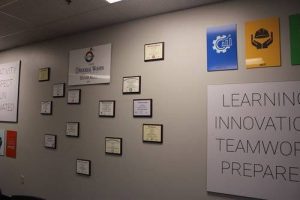 55K: What would you tell another employer about investing in post-secondary education for their employees?

PN: 1) Survey your workforce and see how many already have some college so you know what you have to build on.

2) Take away some of the risk for your employees by not reimbursing tuition but paying it up front.

3)  Have confidence that there will be a return on investment without trying to slot every person into a role in your company that already exists. Have confidence in your business, have confidence in the process, and figure that good things are going to happen when you have a better trained, better educated workforce.

Paul Neumann is CEO and President of Universal Woods, a Louisville-based manufacturer with locations in three countries. If you have questions about implementing an education initiative in your company, reach out to Neumann at [email protected]

Child Care Is a Workforce Issue